Who knew being BAD could be so GOOD
Cart: 0 Items $0.00
Close
john@badassvegan.com
HomeBadassvegan of the Month2013Miss December 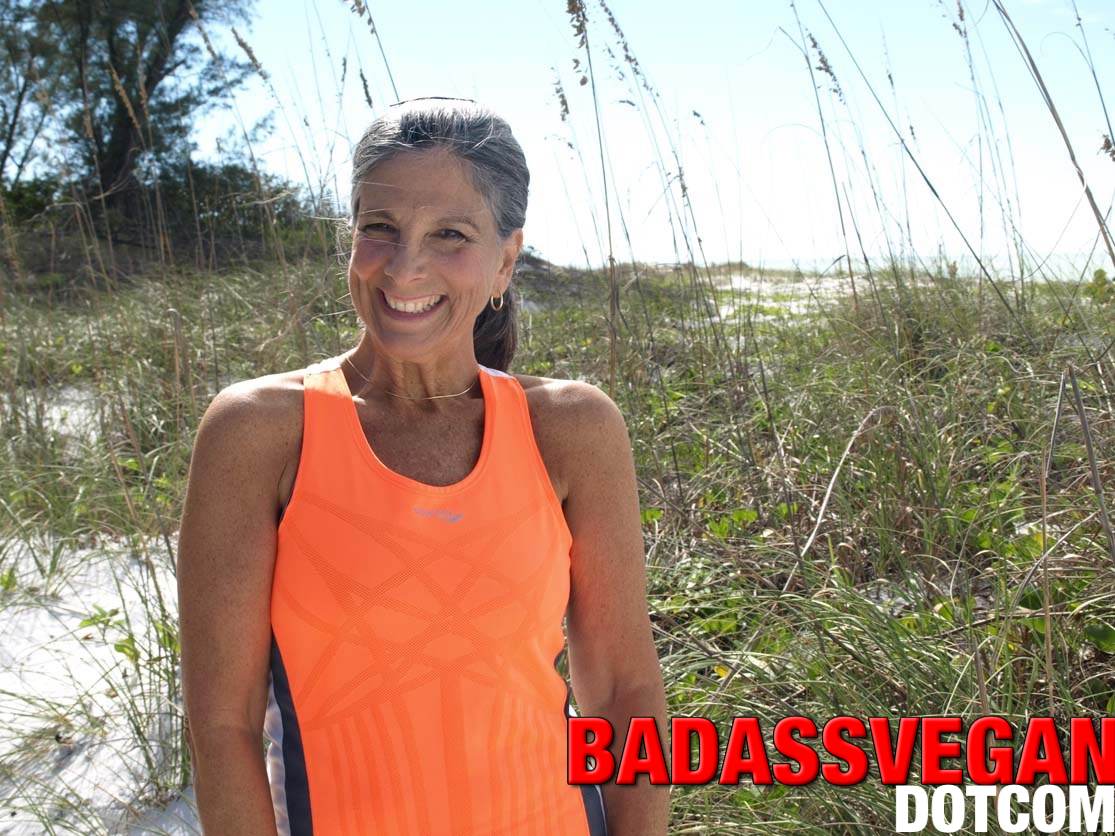 Well now that the year is coming to a close it is time for you all to meet the Sexy Bad Ass Vegan of December. This Florida Beauty is not your average BAV… no!!! Not only is she an accomplished author, she also hasplaced over 62 5K Runs.  She lives in a city that, USA (It’s halfway between Tampa and Sarasota and a city that doesn’t allow fast food restaurants or new buildings built taller than 3 stories… Anna Maria Island, Florida. Don’t we wish all cities would do that.  This Beautiful former reporter also shows her big heart as she explains how she used to report so  many cases of animal abuse while based in St. Louis… Something that I as a former St. Louis resident can also attest to.  When asked what was her favorite thing about being vegan Miss December stated “There are so many. But since I’ve seen so much animal and human abuse, it does seem to be the most effective way to help prevent both. And to save the planet. Hopefully.”  Let’s hope she is right about that! 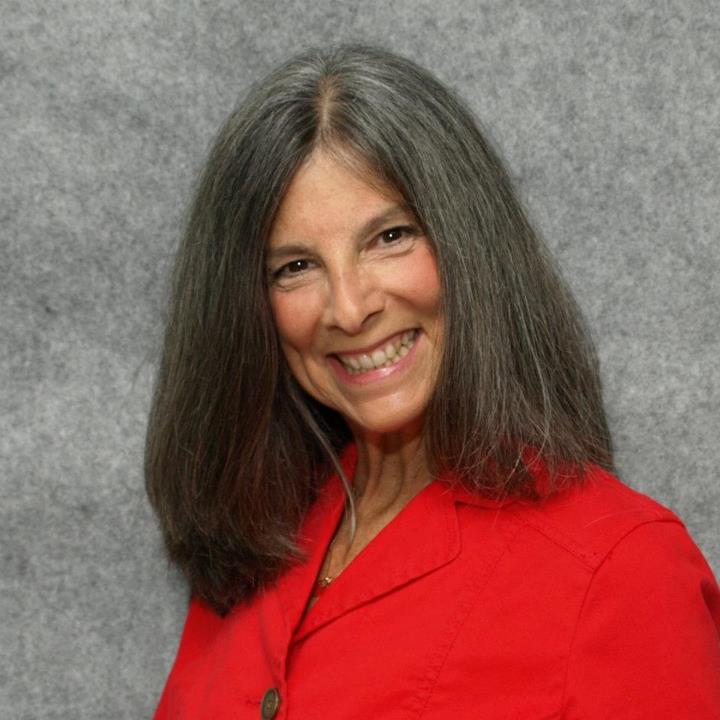 Where do you live and where are you from?   Anna Maria Island, Florida, USA (It’s halfway between Tampa and Sarasota and a city that doesn’t allow fast food restaurants or new buildings built taller than 3 stories–did not know this when I moved here.)

What do you do for a living/profession?  Author “Eat Vegan on $4 a Day-A Game Plan for the Budget-Conscious Cook,” “Kitchen Divided-Vegan Dishes for Semi-Vegan Households,” and “Paleo Vegan-Plant-based Primal Recipes.” I’ve already had offers for #4–My personal fitness journey and methods. I write several local and national newspaper and magazine columns on diet and fitness.

My day job is a certified personal trainer (AFAA) and running coach (RRCA). After a New York Times article about how I helped the reporter improve her marathon time on a vegan diet, I now coach many people online in formats like Skype where they can see my form, and I can see theirs.

What do you like to do for fun?  Running, biking, sailing, Words with Friends

How long have you been vegan?  Most of the past 33 years. 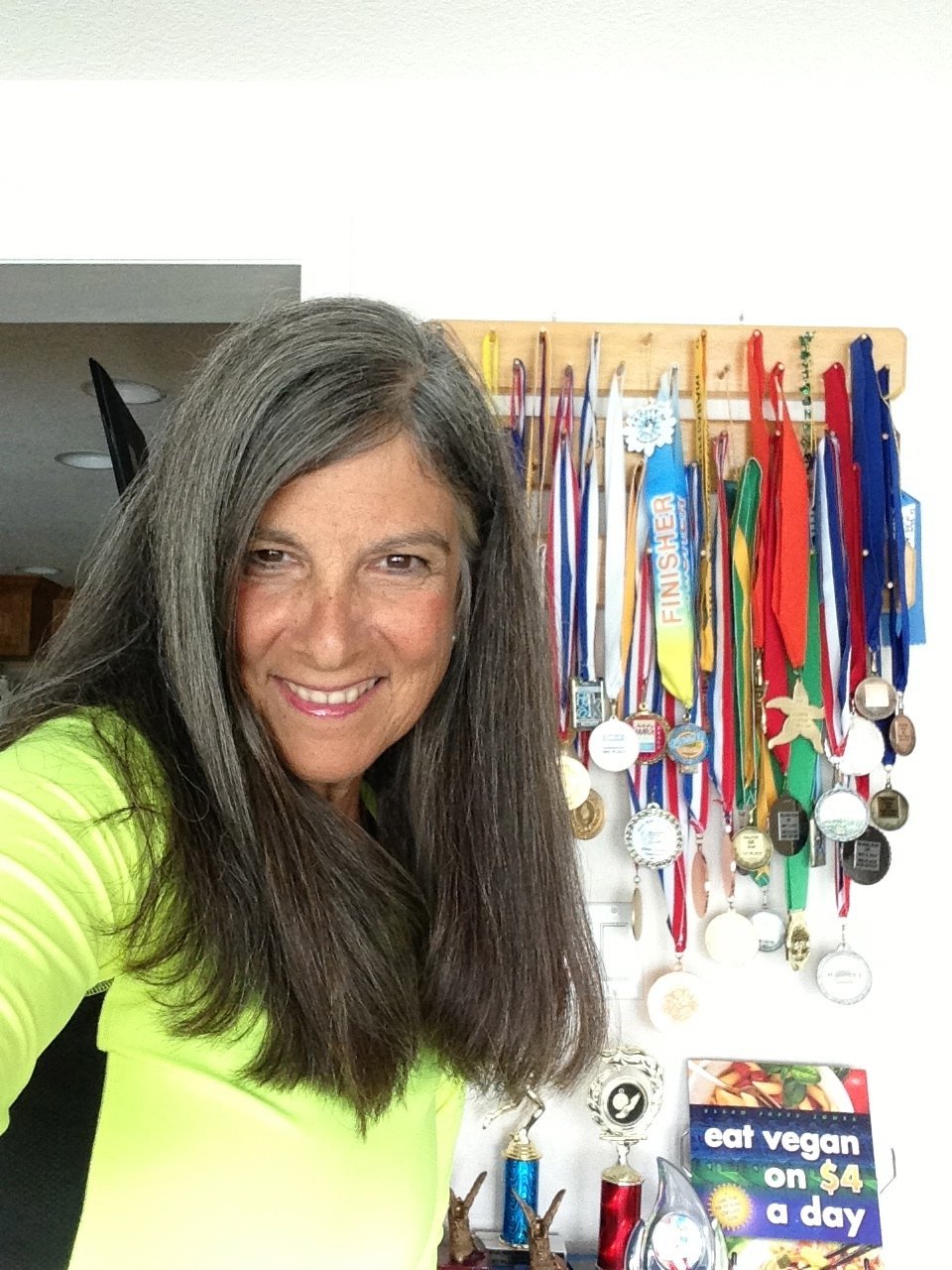 Why did you become vegan?

As a TV reporter, I covered some of the worst animal abuse stories of the time. I saw movies about the abuse of elephants at circuses. I also almost died of a colon blockage the same year my sister got breast cancer. Doctors said, “You better do something different with your life or you will end up like everyone else in your family.” My mom, aunt and both sisters would go on to have breast cancer. We were part of the original breast cancer gene studies. Almost all of the adults in my family of origin also had heart disease and diabetes, with a significant number of Alzheimer’s cases thrown in. I grew up in hospital waiting rooms where our family joked about which wing this disease was paying for.

How was your transition?

Because I’ve seen my sister go through chemo and the other sister with her chest cracked open from heart disease, I’ve had powerful visual motivators over the years. It was easy compared to the many near death and deaths I’ve seen in my family.

My parents were so sick and diseased by the time I had children, they couldn’t lift my daughters, let alone babysit them. I’ve always felt that entire generations are losing each other and don’t even know it.

That said, when I had children, information was not as available then as it is now. Even though I had been a La Leche League leader (a volunteer breastfeeding information and support group), their cookbooks were heavy into meat and cheese. By definition, the group supported species-specific milk, yet upon weaning, the game changed because they relied on mainstream doctors. Breastfeeding was controversial enough without throwing in the vegan diet mandate. They didn’t like to “mix causes.”

As a reporter in St. Louis, home of Monsanto, I became familiar with their creation of bovine growth hormone and as any breastfeeding mother can tell you, the hormones designed to make the cows produce 15% more milk would cause engorgement and infections. As a result, the cows were given routine antibiotics. I can’t help but wonder if that isn’t what caused my sister, the one who didn’t have breast cancer yet, to get MRSA (antibiotic resistant staph inrection) when she went in for routine disc surgery. Her obesity at a young age led to diabetes and heart disease which probably contributed to her need for surgery. She’s now paralyzed for life from MRSA. The dots are so connected. The recent FDA proposed restrictions on wide-spread antibiotic use in animals is a testimonial to the reality that overuse has caused extensive antibiotic resistance in humans.

What is the funniest misconception(s) that you have heard about vegans?  As of this writing, I’ve placed in 62 5K or longer races for my age group, as well as being 7th in the US in the 1500 meters for my age group. When you get your medal at a race, people stare at you for a brief moment. At different races, I’ve had people look at my medal I’ve just received, and then at my bright vegan race shirt and say, “Oh you can’t run on a vegan diet.” Or even better, “You can’t compete in the Olympics on a vegan diet.” I view it as an teaching moment and opportunity to engage. If they don’t ask for my book by the end of the conversation, I feel I haven’t been clear enough. 😉
What is your Favorite thing(s) about being a vegan?  There are so many. But since I’ve seen so much animal and human abuse, it does seem to be the most effective way to help prevent both. And to save the planet. Hopefully.
What do you think makes a Sexy Bad Ass Vegan?   My athletic record as stated above. Also, the publisher of “The Running Journal,” for which I write a monthly column, as well as my coach tell me that it is really rare for anyone with my sprint times to have ever finished a marathon. I credit that to eating a plant-based diet which has gifted me quick recovery and easy energy. I have been runner since I was 28, but I’m actually faster now. I never dreamed of placing in races back then. Now, I wonder what’s wrong if I don’t.

I also used to get sick twice a year during the season changes whenever I ran more than 6 miles. A suppressed immune system after long runs is common, and it is common for some endurance runners to get colds. That doesn’t happen to me anymore. I think it helps that in addition to being a gym rat all my life, along with the personal training and running certifications, an athletic record helps to show that you know more than book knowledge. You practice what you preach.

I don’t think of myself as competitive at all. I only started racing because it was great fun, and I loved meeting other women in my age group whose main goal like mine, is to finish without injury. I’ve translated this to my personal training clients as well: Build, don’t break. With myself and my clients, I’m always asking questions like, “What’s the goal? Is it to get that marathon off the bucket list, or is it to continue the sport until you’re 100?” Goals may or may not be compatible.

I found that as I kept racing, the opportunity to expose people who had never met a vegan, let alone raced against one, was very exciting and important. To be a poster child of what a balanced vegan diet can accomplish is important for all of us. I was pretty sure that at my first race, I would be last. I wasn’t. That’s important to remember if you’re thinking about racing. 99.9% of us won’t be last.

Beyond sports, I’m well known in the vegfest and publishing community as a tireless worker doing anything and everything to get the word out. “No” is my least favorite word. I just feel that time is short to save lives of all kinds. 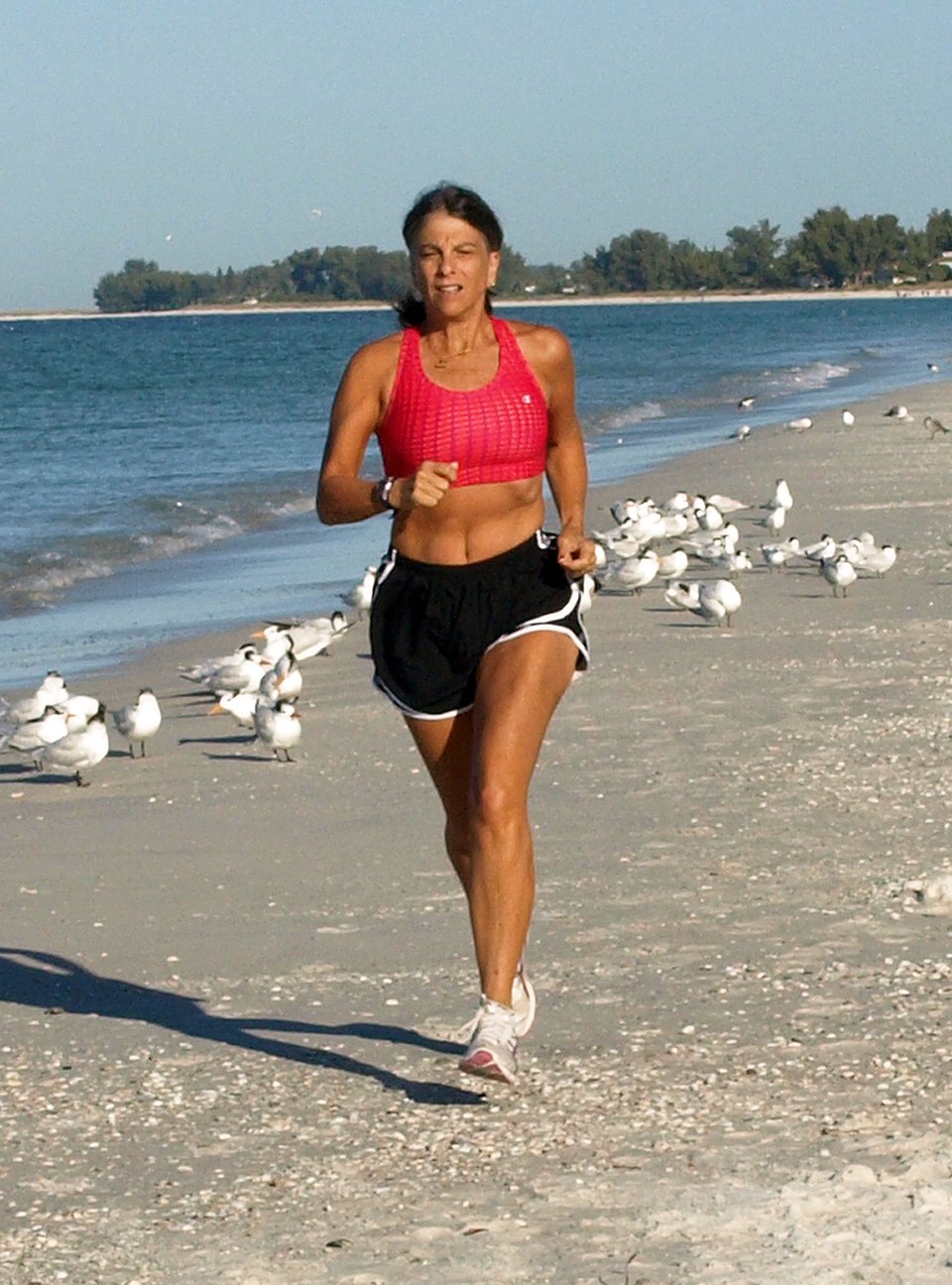 I love this recipe because it’s so easy and fast to make. When our mango tree is producing, I could eat this recipe every day for two months! 😉

What is the best Vegan Restaurant you have ever had the pleasure of eating at?  One of the many things I love about being on book tour, especially with my publisher, is going to delicious vegan restaurants wherever we are. Where I live, it is a huge fishing community and people drive around with bumper stickers that say, “I Kill Fish!” (If I can be vegan here, anyone can.) Every vegan restaurant is such a treat because there aren’t any here. I love them all! But Cafe Gratitude in LA, Millennium in San Francisco, Karyn’s on Green in Chicago and oh so many more! Don’t get me started on New York.

Find a good vegan restaurant for starters. Head to a VegFest where you can taste the food and lifestyle for a day or two. Then try an immersion weekend…I believe Dr. McDougall has been offering them the longest, but there are other doctors who are involved with them. I’ve been honored to be part of a few including “Get Healthy Marshall” which is a fabulous weekend put on by the mayor of Marshall, Texas after he reversed his prostate cancer. He and his wife have practically gotten the whole town to go vegan.

It is really exciting to see this kind of change. But for those who can’t travel to these kinds of events, pick up a few books by the vegan doctors who have been singing from this songbook for a long time. In addition to Dr. McDougall, others whose books/videos I love and have followed over decades are Dr. Neal Barnard, T. Colin Campbell, Dr. Alan Goldhammer, Dr. Michael Klapper and Dr. Pam Popper. I also recommend watching some of the more popular vegan movies, most of which are on Netflix, such as Farm, Inc., Veducated, Forks Over Knives, and so many more. If you look for vegan Meet-ups in your area, they often show these movies so you can talk about them with like-minded people. 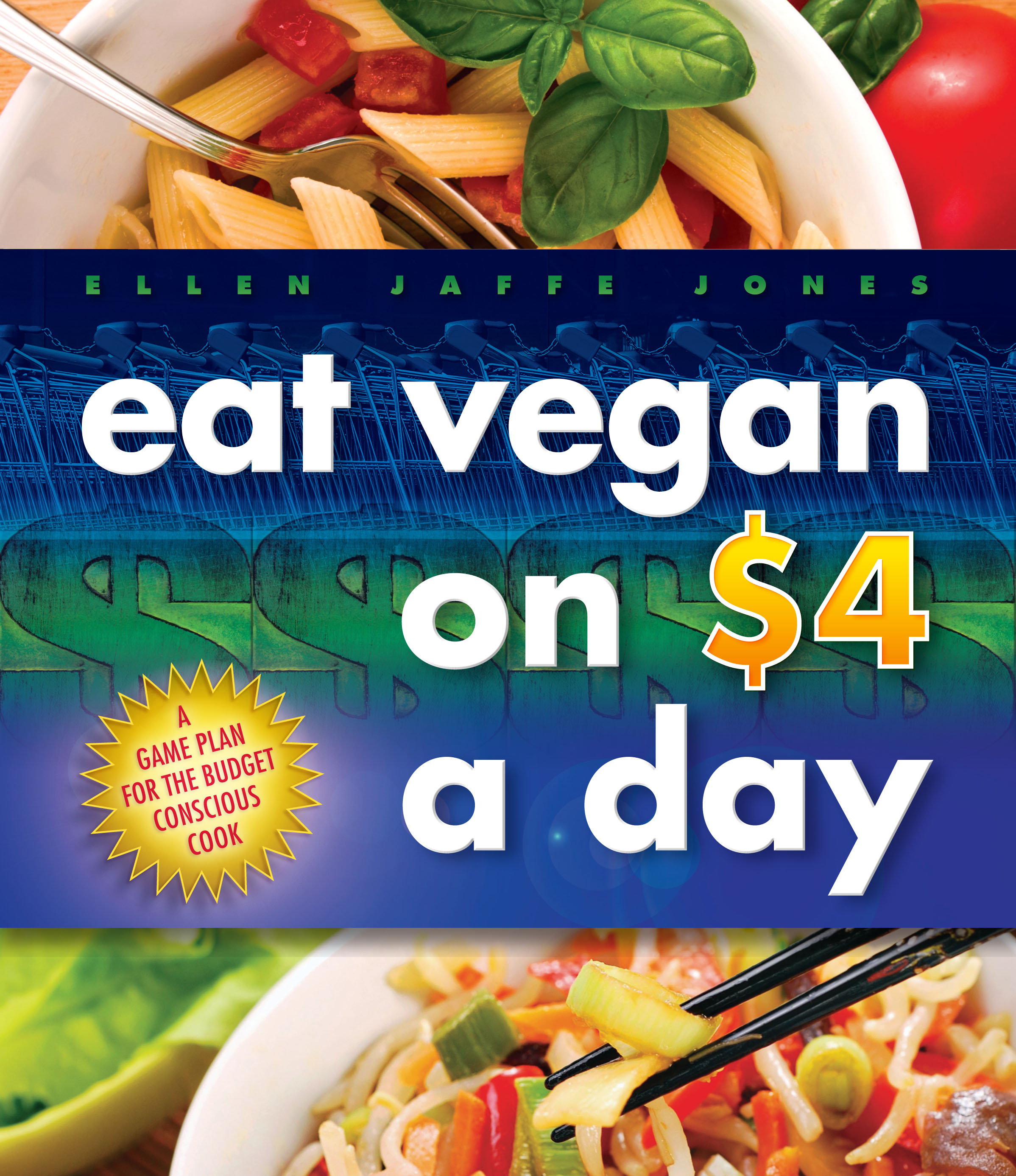