Who knew being BAD could be so GOOD
Cart: 0 Items $0.00
Close
john@badassvegan.com
HomeBadassvegan of the Month2020March 2020 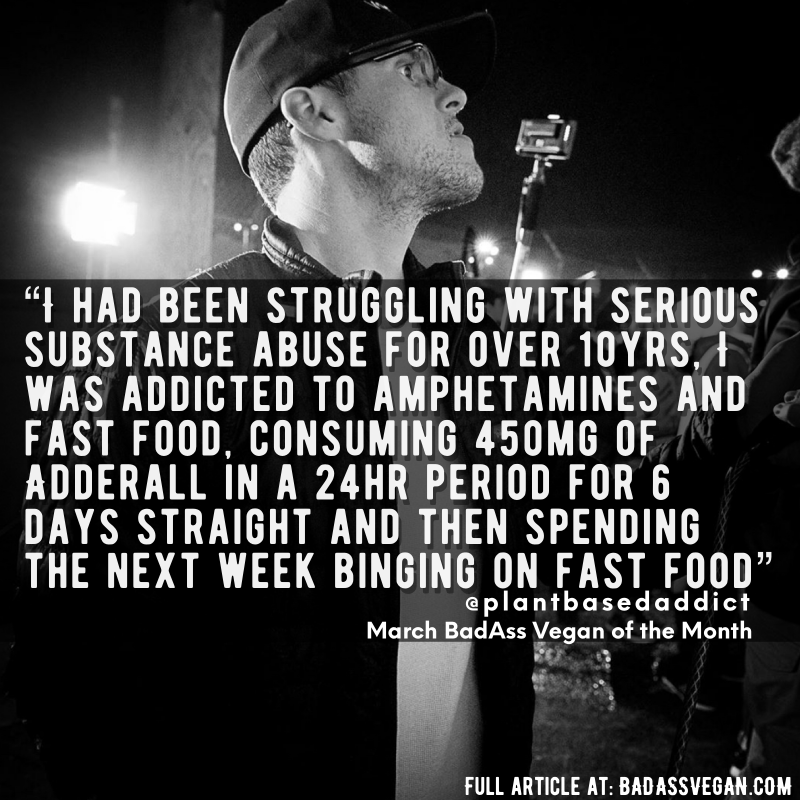 Where do you live and where are you from? I live in Austin, TX

What do you do for a living/profession?

I am the founder/executive director of the non-profit Plant-Based for Positive Change, I am a diabetes and food addiction coach for Mastering Diabetes, a speaker for Rip Esslestyn’s Engine 2 events, and an international motivational speaker.

What do you like to do for fun? I love trail running, weight training in the gym, and spending as much time as possible with the people I love the most.

How long have you been vegan?  I have been vegan for almost 8 years.

Why did you become vegan?   I had been struggling with serious substance abuse for over 10yrs, I was addicted to amphetamines and fast food, consuming 450mg of Adderall in a 24hr period for 6 days straight and then spending the next week binging on fast food. I weighed nearly 350lbs and I had become completely disconnected from every meaningful bond in my life. This disconnection caused me immense pain – physically, emotionally, and spiritually. Living hurt. I couldn’t figure out how the drug use which was at one point in my life the greatest solution to escaping a life that was too painful a place to be had become the most inescapable and insurmountable problem I had ever faced. I couldn’t take it anymore and on Aug. 21st of 2012 I attempted suicide by drug overdose. I found myself on the floor of my apartment, face down in a puddle of vomit, in a pile of fast food garbage completely alone. Then I felt something I wasn’t expecting – relief. I felt immense relief that I hadn’t died which helped to understand that my suicide attempt wasn’t an attempt to end my life, it was an attempt to end my pain. That I felt relief because there was something about myself and my life that I loved enough to still want to be a part of it all. I checked into rehab where I was diagnosed with type 2 diabetes, high cholesterol, high blood pressure, erectile dysfunction, bipolar disorder, suicidal depression, anxiety disorder, sleep disorder, and attention deficit disorder. I was put on a cabinets worth of medication for life and I was crushed. I thought all I was going to have to face was my substance abuse now that whole idea had just been shattered. Luckily 2 years before this I had attended an event hosted my Rip Esselstyn where I learned about the benefits of a plant based diet and I decided to put it to use. Within 4mo I had completely reversed my diabetes, heart disease, and erectile dysfunction. Within 10 months I had lost 100lbs and within a year I was off of every medication I was prescribed in rehab including all the psych meds. As of today I have lost 180lbs and I am the healthiest I have ever felt. All of this is great and impactful but my suicide attempt is the reason I have gone vegan. I experienced what it felt like to almost lose everything that is meaningful – life and love. I will never again willingly do the same to another living being.

How was your transition?  Well my transition was certainly unique because I did it while in a sober living home. This is place where you live with other people in recovery from substance abuse. So I was living in a house with 12-14 other guys right after I had completed 37 days in rehab. So I was transitioning my diet and trying to learn self love and recovery. I told myself I was going to make the food so simple that it would be nearly impossible to fail. I ate oatmeal for breakfast, a black bean bowl with veggies for lunch and for dinner. I ate that everyday for 10months. I wanted it to be harder for me to make the wrong choice than the right one. Obviously since then my diet has become much more diverse (sort of hahaha) but I told myself that my goal wasn’t to try every vegan recipe in the world, it was to fall in love with the behaviors that brought positive change into my life. I knew that if I could fall in love with eating plant foods and what they did for me then I would do it for the rest of my life.

What is your Favorite thing(s) about being a vegan?

I would have to say that its freedom.  A freedom that I feel in my soul knowing that I am truly in alignment with love and compassion. That veganism isn’t the moral high ground, it’s the moral baseline. Its where true compassion starts not ends. This is why Veganism is a return to our truest way of living. There is something within you that looks at how we treat non-human animals and speaks to you saying, “this feels wrong” it comes from a place of deep knowing that this is a misstep in our shared experience with the world. This voice is there because you are a part of nature. To cause suffering to any living being is to cause suffering within yourself. We have been animals in nature far longer than we have been animals living apart from it. This is part of why we feel a longing to return to nature and feel a need to once again be a part of it all.

What Do you think makes a BadAss Vegan?   A Bad Ass Vegan in my opinion is someone who can stand up strong for the animals and the planet with a gentle heart. Someone who willingly bears witness to the suffering of humans and/or animals on the planet so that he/she can move towards it and ease their suffering. Someone who never lets an opportunity to do what is right pass them by even if its uncomfortable or unpopular. Someone who says, I will be kind even when the world has forgotten how to do so.

.What is the best vegan dish that you make in your kitchen?

Well, I still eat very simply but I would say that my best vegan dish is my purple sweet potato oatmeal.

Bake a Hawaiian Sweet Potato (or any other sweet potato. The Hawaiians are my favorite and they are purple on the inside.)

Cook a bowl of oatmeal and simply mash the sweet potato into the oatmeal and add a topping of cinnamon.

What is the best Vegan Restaurant you have ever had the pleasure of eating ?   This is easy ATX Food Co. in Austin, TX. The best vegan food in the world!!!

BADASSVEGAN OF THE MONTH is brought to you by:
@livevegansmart